Where Munson stands the tallest, and where his contribution to the game of baseball is most unique, is his postseason productivity in his  six postseason series.  In 30 post-season games,  Thurman Munson unambiguously holds the best postseason record of any Catcher in the history of the game.

Compared with Hall of Fame Catchers 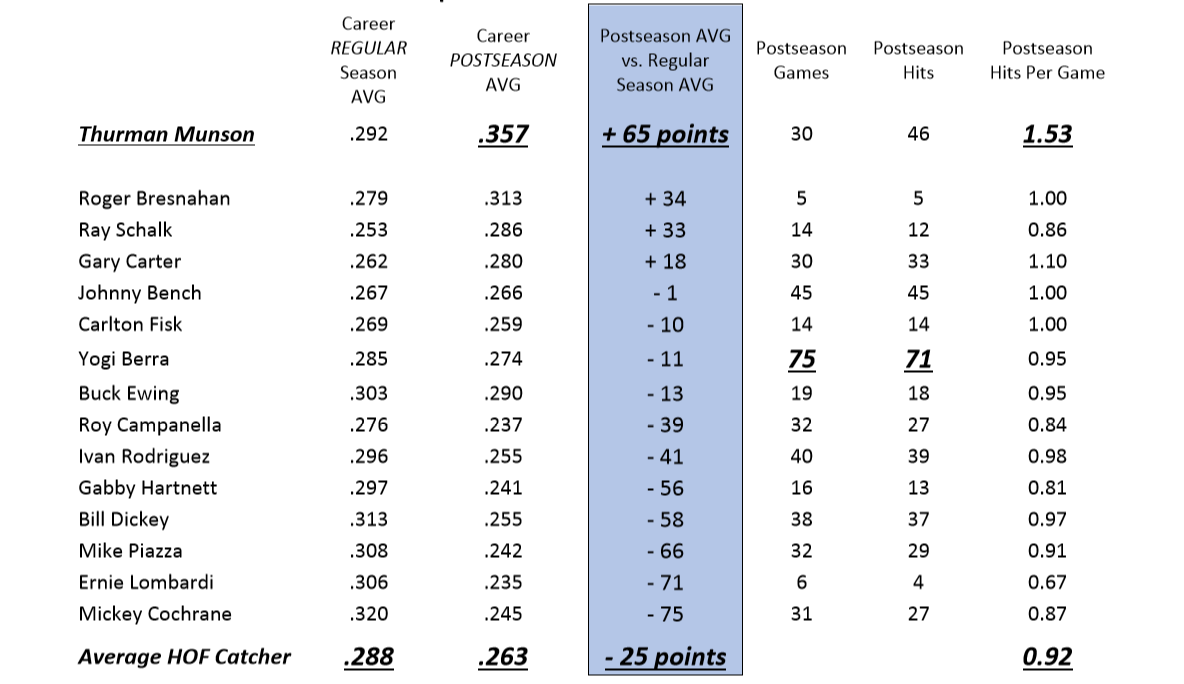 Analytical Point 2: HOF Catcher Rick Ferrell did not play in the postseason, but his Regular Season AVG of .281 is included in the Hall of Famer AVG.

Munson Stands Even Taller – Beyond Just Catchers in the Postseason

To put his achievements in perspective,  of  500 players of any position with 65 or more post-season plate appearances, there are only  seven players with a higher postseason batting average than Thurman Munson (Hank Aaron, Carl Yastrzemski, Paul Molitor, Lou Gehrig, Lou Brock, John Montgomery Ward, and Frank Baker)- all of whom are in  Hall of Famer and none of them were Catchers. In other words, of the 500 players with the most postseason At Bats, 492 of them have a lower batting average than Thurman Munson, and the 7 who are higher are all in the Hall of Fame.

And further still… if you limit the list of 500 players to only the 162 with at least as many postseason At Bats as Thurman (129), none of these Hall of Famers has a higher batting average!

The ONLY player on this list that is not in the Hall of Fame is–Thurman Munson. Moreover, Munson is the only Catcher on the list.

The only player with a higher hits per post-season metric is Paul Molitor who delivered 1.48 hits per postseason game with 43 hits in 29 games and 117 At Bats.

For Thurman Munson, as a Catcher, to be this high on the list of postseason batting average and hits per game is, at least, VERY historically unique and unduplicated!